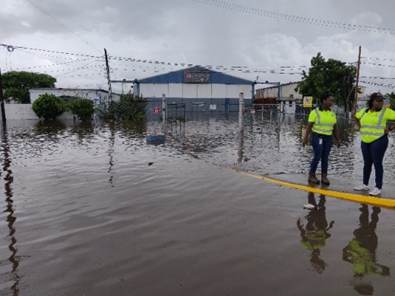 Scarce resources and high demand for climate adaptation and mitigation in developing countries make applications for funding competitive. For instance, less than USD1 Billion in funding was available in 2010 globally, but the needs of USD70 to 100 Billion (World Bank) dwarfs these. Funding allocation is highly skewed and Small Island Developing States (SIDS) are generally dissatisfied with international financing and access (Robinson and Dornan, 2017).

Accessing funding will therefore require SIDS to formulate projects clearly that are worthwhile and competitive socially and economically. The worthiness of a project lies in its social, environmental and economic footprint and feasibility. Defining the economic footprint relies on defining not only its costs, but more importantly, the returns on the investments for substituting risks. This requires a process of defining risks profiles, implementation and deferred costs and returns. CEAC has undertaken economic analysis of road, coastal and flood control works to define the feasibility of project sub-components and aid in the focusing of funding across the region.

Defining scope and risks require an understanding of both engineering and disaster vulnerability of both social and infrastructure assets. For instance, flooding in an urban setting might impact residential, transport and industrial assets. Losses to homes, delays to motorists and damage to export crops would all be legitimate components that need to be considered. Annualizing these risks yields a first cut estimate of the value of a mitigation project. Estimating deferred losses relies on defining the changes in the risk profile between the pre and post-project scenarios. Larger drains and stronger revetment will naturally reduce the risks to exposed communities, but, at what implementation cost?

Economic feasibility is often defined using benefit to cost ratio, payback period and internal rates of returns (Duvigneau and Prasad, Word Bank 1984 and Cubbage et al, World Bank 2013). Assessment across return periods can also be helpful in evaluating the incremental benefits from further investments. For example, in a flood control project CEAC investigated, favourable and higher rates of return were only realized after a revision in the design approach that included softer and nature-based structures. In other words, economic analysis can guide engineering decisions.

Funding for adaptation projects at both the national and international level is limited and the best use of resources has to be determined. Defining project costs, annualized risk before and after projects can provide useful information for economic analysis. This process requires understanding cross-sectoral vulnerability and the implied costs. Rates of returns in excess of 10 to 15% are commonly deemed acceptable and nature-based solutions can improve economic feasibility. 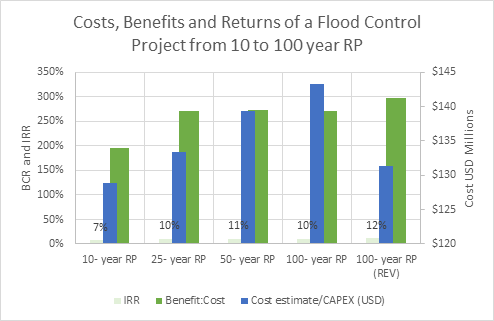 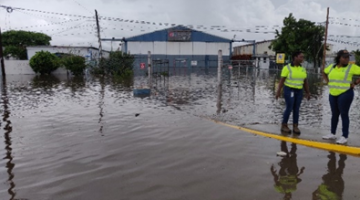